This article explains each of the shift rules related to clocking out. Virtual TimeClock shift rules allow you to control time clock usage in ways that help you comply with labor laws and control unwanted overtime.

Note: Shift rules are available in Pro and Network editions. 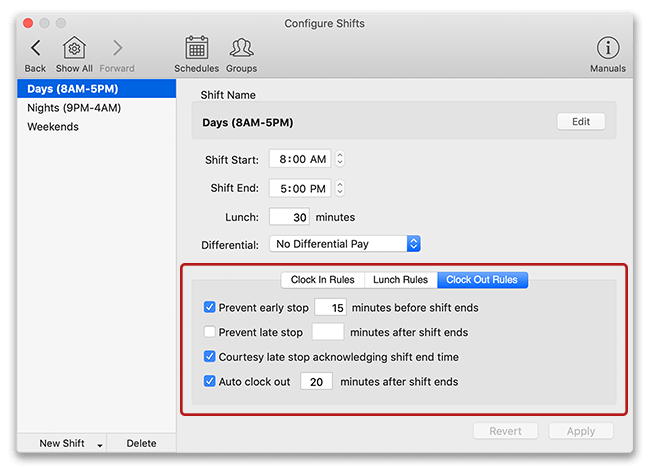 Note: To learn how to create a shift, see creating shifts in Virtual TimeClock.

The following is a brief explanation of each clock out rule:

Prevent Early Stop of Shift
This rule prevents employees from clocking out too early from their shift. Employees will be unable to clock out until they are within the defined grace period in which they can clock out before their shift ends. If a user triggers this rule, they will see the following dialog:

Prevent Late Stop
This rule limits employees from accumulating overtime without the knowledge of management. After the grace period from the end of the shift users will be required to seek out a manager to approve their late departure. If a user triggers this rule, they will see the following dialog:

Courtesy Late Stop
Similar to the Courtesy Early Start and Return, the Courtesy Late Stop requires a user to acknowledge they are clocking out after their shift ended and that the recorded end time will be the end of the shift. If a user triggers this rule, they will see the following dialog: 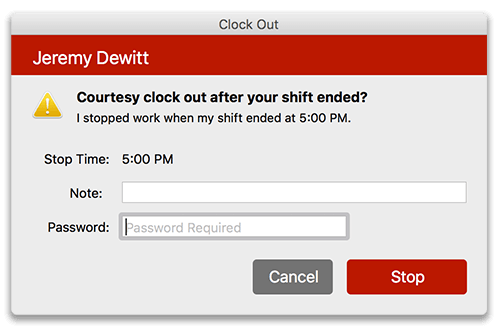 Note: Example: if this rule is enabled and the Courtesy late stop is set to 10 minutes, the time clock will auto clock out users that are still clocked in 10 minutes after a shift is over. When users are automatically clocked out the recorded end time will be the end of the shift. For example, a user can punch out at and record 5:05, but if they are auto clocked out at 5:11 the out time on their timecard will be the shift end time of 5:00.